The constitution also allows direct participation of the electorate by initiative, referendum, recall and ratification.

Colorado is located in the Western region of the USA with Denver as its capital.  Jared Polis (D) is Governor.

The Colorado legislature, founded in 1912, has 35 Senate members and 65 House members.

Jared Schutz Polis (/ˈpoʊlɪs/; born May 12, 1975) is an American politician, entrepreneur, and philanthropist serving as the 43rd governor of Colorado since January 2019.

A member of the Democratic Party, he served one term on the Colorado State Board of Education from 2001 to 2007 and five terms as the United States Representative from Colorado’s 2nd congressional district from 2009 to 2019. During his time in Congress, he was the only Democratic member of the libertarian conservative Liberty Caucus. He was elected governor of Colorado in 2018, defeating Republican nominee Walker Stapleton.

Michael Farrand Bennet (born November 28, 1964) is an American businessman, lawyer, and politician who has served as the senior United States Senator from Colorado since 2009. A member of the Democratic Party, he was appointed to the seat when Senator Ken Salazar became Secretary of the Interior. Bennet previously worked as a managing director for the Anschutz Investment Company, chief of staff to Denver Mayor John Hickenlooper, and Superintendent of Denver Public Schools.

“We must meet the promise each generation has made to the next: to leave more opportunity, not less, for our kids and grandkids.” Michael Bennet

John Wright Hickenlooper Jr.[(/ˈhɪkənluːpər/; born February 7, 1952) is an American politician, businessman, and geologist serving as the junior United States Senator from Colorado since 2021.

Diana Louise DeGette (/dɪˈɡɛt/; born July 29, 1957) is an American lawyer and politician serving as the U.S. Representative for Colorado’s 1st congressional district since 1997.

A member of the Democratic Party, her district is based in Denver. DeGette was a Chief Deputy Whip from 2005 to 2019 and is the dean of Colorado’s congressional delegation; she served as the Colorado State Representative for the 6th district from 1993 until her election to the U.S. House.

Joseph D. Neguse (/nəˈɡuːs/ nə-GOOSE; born May 13, 1984) is an American politician serving as the U.S. Representative for Colorado’s 2nd congressional district since 2019. The district is based in Boulder and includes many of Denver’s northwestern suburbs, as well as Fort Collins.

A member of the Democratic Party, he was a Regent of the University of Colorado from 2008 to 2015. Neguse is the first Eritrean-American elected to the United States Congress and Colorado’s first black member of Congress.

Kenneth Robert Buck (born February 16, 1959) is an American lawyer and politician who represents Colorado’s 4th congressional district in the United States House of Representatives as a Republican.

Douglas Lawrence Lamborn (born May 24, 1954) is an American attorney and politician currently serving as the U.S. Representative for Colorado’s 5th congressional district.

He is a member of the Republican Party. Having first been elected in 2006 and taking office in 2007, his district is based in Colorado Springs.

Jason Crow (born March 15, 1979) is an American lawyer, veteran, and politician who is a member of the United States House of Representatives from Colorado’s 6th congressional district. Crow is the first member of the Democratic Party to represent the district, which encompasses several of Denver’s eastern suburbs like Aurora, Littleton, Centennial, and Thornton.

Crow was an impeachment manager during his first term in Congress at the first impeachment trial of President Trump.

Edwin George Perlmutter (born May 1, 1953) is an American lawyer and politician serving as the U.S. Representative for Colorado’s 7th congressional district since 2007.

A member of the Democratic Party, his district is located in the northern and western suburbs of the Denver metropolitan area. He previously served as the Colorado State Senator from the 20th district from 1995 to 2003.

The Government of Colorado is the governmental structure as established by the Constitution of the State of Colorado. It is composed of three branches: the executive branch headed by the Governor, the legislative branch consisting of the General Assembly, and the judicial branch consisting of the Supreme Court and lower courts. The constitution also allows direct participation of the electorate by initiative, referendum, recall and ratification.

The statewide elected officers are:

The Lieutenant Governor is elected on a ticket with the Governor. All statewide elected officers serve four-year terms. There are also elected members of the Colorado State Board of Education, and the Regents of the University of Colorado are elected from districts coterminous with Colorado’s congressional districts or at large. As a result, the Governor does not have direct management authority over either the Department of Education or any of the state’s institutions of higher education.

The executive branch is otherwise composed of the principal departments:[1] 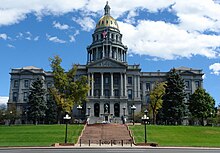 The Colorado State Capitol in Denver

The legislative body of Colorado is the Colorado General Assembly made up of two houses, the House of Representatives and the Colorado Senate. Members of the House are elected for two year terms from single-member, equal population districts. Approximately half of the members of the state senate are elected each two years to four year terms from single-member, equal population districts. The House of Representatives has 65 members and the Senate has 35 for a total of 100 legislators in Colorado.[citation needed] The session laws are published in the Session Laws of Colorado.[2] The laws of a general and permanent nature are codified in the Colorado Revised Statutes (C.R.S.).[2]

In addition to providing for voting,[3][4] the people of Colorado have reserved initiative of laws and referendum of laws enacted by the legislature to themselves,[5] and have provided for recall of office holders.[6]

The judiciary of Colorado is defined by Article VI of the Colorado Constitution as well as the law of Colorado. The administration of the state judicial system is the responsibility of the Chief Justice of the Colorado Supreme Court as its executive head, and is assisted by several other commissions. Colorado courts include the:

All of the courts above, other than municipal courts and Denver’s county court, are part of the state court system. In Denver, county and municipal courts are integrated and are not part of the state court system for administrative purposes, and the Denver Probate Court and the Denver Juvenile Court have jurisdiction over probate and juvenile matters, respectively. Outside Denver, these matters are within the jurisdiction of the district courts.

Most crimes in Colorado are prosecuted by a district attorney. One district attorney is elected for each of the state’s 22 judicial districts in a partisan election. The state attorney general also has power to prosecute certain crimes, and in rare circumstances a special prosecutor may be appointed to prosecute a crime on a case by case basis. Municipal ordinance violations are prosecuted by city attorneys.

The Denver City and County Building.

The 272 Colorado municipalities operate under one of five types of municipal governing authority:

There are no township governments in Colorado, but there are more than 4,000 special districts. See Active Colorado Local Governments.

There are two federally recognized tribes that overlap Colorado: the Southern Ute Indian Tribe and the Ute Mountain Ute Tribe.[7]

OnAir membership is required. The lead Moderator for the discussions is Fatima Iftikhar.
We encourage civil, honest, and safe discourse. See Terms of Service for curation guidelines.

This is an open discussion on the contents of this post.